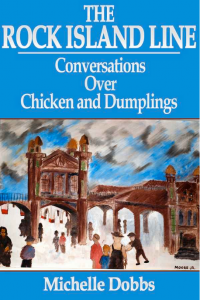 The title of this fictional, but historically rooted African American family saga comes from an old blues song and the eponymous railroad line that inspired it… Set in the town of Rock Island, Illinois, beginning in 1924, the Moore family story is told from the perspective of Lilly, a “willful” daughter living a more or less idyllic life in the hard-working but prosperous Moore household. As she grows up with her best friend and American Indian neighbor Lois, Lilly vacillates between a longing to see the world and a growing appreciation of the meaning of home, especially as she watches her beloved “Aunt” Maggie (a boarder taken in and employed by her family) and Uncle Pearl driven away by the Moore family’s resistance to their romance. As she grows older, Lilly also slowly realizes the illicit and sometimes violent roots of the events and histories that she had taken for granted as a child, including Maggie’s rise to wealth through the Prohibition-era bootleg trade; a murder that solidified her grandparents’ uprooting from Pike County; and her own unsuspected origins…

What People Are Saying

Michelle Dobbs’ Rock Island Line is a fine look into historical beliefs of African American families, as well as powerful commentary on class. Writing from the viewpoints of distinct characters, Dobbs gives us a glimpse of superstitions and spirituality that touches the lives of many.

In terms of delivery, the words sway together and offer up for close inspection the feel of a time period long since gone. Conversational dialect is authentic, produced in a respectful tone. Each character is a colorful 3-dimensional woman, represented in print by the strength of her words.

In a sense, these women are the spokeswomen of a tribe of African American pioneers of sorts trying to break the culture barrier of traditionally white Rock Island. For anyone who enjoys period-style pieces and rich storytelling, Dobbs’ Rock Island Line is a must.

Comments are closed, but trackbacks and pingbacks are open.